The History of Vinyl Fashion 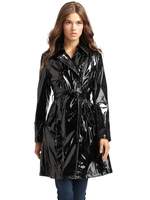 During the first decades of its existence, vinyl clothing was used only for rainwear.

In the mid 1960s couture designers André Courrèges, Pierre Cardin, and Paco Rabanne, noted for their modern and futuristic looks called 'Space Age', seized upon the high-tech look of vinyl.

Even over the decades, the vinyl has not lost its futuristic, high-tech and space-age appeal. Costume designers of Science-fiction films and series have always liked the material.

The 90s begin, and with them vinyl returns to fashion with all the glamour it had in the 1960s. Singers, TV presenters, movie stars and many other people come to wear vinyl clothes.

Since 2010, vinyl has acquired a large space both in haute couture and in everyday fashion, consecrated as a great fashion icon.

The History of Vinyl Fashion

Considered by many people as the sexiest fashion fabric, vinyl is a plasticized variation of Polyvinyl chloride (PVC). Although PVC is hard, with the addition of plasticizers it can be made pliable enough, for example, to coat fabrics in any thickness.

In 1926, the plastic was accidentally discovered by Waldo L. Semon, a scientist working for the company BF Goodrich.

The vinyl fabric currently manufactured consists of a polyester base coated with a glossy plastic layer that can be of various colors, including striped. The plastics used are usually PVC (Polyvinyl chloride) and PU (Polyurethane), and the transparent version of the vinyl has no polyester base, possessing only the PVC layer.

During the first decades of its existence, vinyl clothing was used only for rainwear, but in the 60's vinyl acquired a new status in fashion.

Vinyl and the Space Age

Vinyl, came into high fashion during the 1960s. At that time, within the context of the Cold War, United States and Soviet Union were disputing who had the best space technology, launching rockets and satellites into space, culminating in the Apollo 11 Mission landing on the Moon in 1969. At the same time that there was a climate of tension between the two world superpowers, there was a certain revolutionary air among the young people, a great desire to challenge existing society. And in the fashion of those years was no different: both the technological revolution and the aspirations of youth reflected in the creations of sixties fashion designers.

In the mid 1960s couture designers André Courrèges, Pierre Cardin, and Paco Rabanne, noted for their modern and futuristic looks called 'Space Age', seized upon the high-tech look of vinyl. This fabric not only gave a new surface appeal to their designs, but lent a modern structural look to the designers' new vision of architectural shapes rather than fluid draped lines. Modern clean-lined geometric shapes characterized their designs. Garments were cut to suggest simple geometric forms, boxy with hard edges, angular straight lines, or circular in shape.

André Courrèges, who claimed to have invented the miniskirt (Many attribute the invention of the miniskirt to Mary Quant), made vinyl fashionable with his miniskirts, helmets, A-line dresses, and suits. Inspired by astronaut boots, he used vinyl in his "Moon Girl Collection" to create the shiny white boots that accessorized his designs. The "Courrèges boot" was mid-calf length with open slots at the top and a tassel or bow in front. Soon the look was being copied everywhere. Popularized by teenagers wearing the boots on discotheque television shows, they were soon called "go-go boots" after the gogo dancers who wore them.

At the same time in England, the "Mod" fashion look first appeared on London's King's Road and Carnaby Street. The op art and pop art movements inspired the trendy English designer Mary Quant. She popularized the miniskirt, high vinyl boots, and shoulder bags. She used vinyl-coated fabrics to create what was called the "wet look" not just in raincoats, but in tight miniskirts and dresses as well.

And so came the vinyl clothes that dominated the catwalks and streets that decade, being used by celebrities like Audrey Hepburn, Raquel Welch, Joanna Lumley, Britt Ekland, Brigitte Bardot, among others, becoming one of the fashion icons of the 1960s.

Vinyl and the Urban Tribes

From the late 1970s, vinyl was adopted by urban tribes. It was at this time that the Punks and the Goths began to wear clothes made with this material. And in the 90's, it was the turn of the Clubbers to incorporate the fabric into their costumes.

The heritage of the Space Age

Even over the decades, the vinyl has not lost its futuristic, high-tech and space-age appeal. Costume designers of Science-fiction films and series have always liked the material. The fabric was often used to compose the costumes of characters from these audiovisual productions. This is the case, for example, of the character Trinity in the movie 'The Matrix Reloaded', played by the Canadian actress Carrie-Anne Moss, who had an all vinyl suit. Another notable personage was Anri, the android of the Japanese TV series 'The Fantastic Juspion', played by Kiyomi Tsukada, whose clothing had many parts made with the fabric. And these days these characters are enthusiastically revived by their fans in Cosplay, which is yet another cultural phenomenon where vinyl plays a big role.

The 90s begin, and with them vinyl returns to fashion with all the glamour it had in the 1960s. Singers, TV presenters, movie stars and many other people come to wear vinyl clothes. Even men surrender to the charm of the fabric. Elizabeth Hurley, Madonna, Spice Girls, Shania Twain and Janet Jackson are among the group of people who wore vinyl at that time.

In 1994, the Italian brand Versace launched its fall/winter collection with the most famous top models of the 90s, among them Nadja Auermann, Stephanie Seymour, Claudia Schiffer and Cindy Crawford, all dressed in vinyl.

In 1995, Janet and Michael Jackson released the music video 'Scream', in which both appear dressed in vinyl pants. Also in 1995, Madonna released the video clip 'Human Nature', in which the singer appears dressed in a vinyl catsuit.

The plastic fabric was also widely used in the costumes of singers and groups of Dance Music, a very popular musical genre in the 1990s and which is now known as Eurodance. Dance-Music's famous names like Nicki French, Whigfield, Masterboy, La Bouche, among others, used vinyl in their costumes at that time.

Vinyl in the current

Since 2010, vinyl has acquired a large space both in haute couture and in everyday fashion, consecrated as a great fashion icon.

Brands like Versace, Anthony Vaccarello, Zara, TopShop, Asos, H&M, Boohoo, Pull&Bear among others, invest heavily in clothes made with this material. Famous models such as Elle MacPherson, Alexa Chung, Ece Sükan, Bella Hadid, Kendall Jenner, and many other celebrities are wearing vinyl looks.

Emmanuelle Alt, current editor-in-chief of Vogue Paris magazine, and Carine Roitfeld, her predecessor, both with great influence and knowledge in the fashion world, have been seen many times with vinyl looks, showing that the trend has come to stay.

As you can see, vinyl has already gained its place among the classics and will probably no longer depend on the seasonality of Fashion. It will always be present in women's fashion, as well as leather and jeans.